Walder was born and raised in Deerfield, Illinois. Following his graduation from Deerfield High School, he briefly attended the University of Arizona in Tucson Arizona.He then also attended The Boston Conservatory of Music, and The California Institute of the Arts.[1] He also studied privately with teachers at The... Xem toàn bộ

Walder was born and raised in Deerfield, Illinois. Following his graduation from Deerfield High School, he briefly attended the University of Arizona in Tucson Arizona.He then also attended The Boston Conservatory of Music, and The California Institute of the Arts.[1] He also studied privately with teachers at The New England Conservatory of Music. At age 17 he toured Europe and North American with the United States Youth Symphony appearing in Carnegie Hall and Royal Albert Hall among many notable venues. Walder came onto the contemporary jazz instrumental scene quickly in 1982, at the age of 19, after joiningWindham Hill Records and then recording Elements with pianist Ira Stein. The pair met at Naropa Institute while studying with the jazz fusion group Oregon. Walder also studied with Oregon Jazz legend Paul McCandles. After the success of Elements, Walders next recording, 1986's Transit, again with Stein, also included performances by Bruce Hornsby and mixing by Mark Isham. Walder then signed to Narada Records releasing Under The Eye again with Stein. The recording also featured Marc Anderson, the percussionist from the Steve Tibbetts Group. The duo toured Europe and Spain numerous times with an expanded lineup of side musicians and also performed with Kurt Wortman. The pair headlined at the Spain Expo of 1992 in Seville.Walder went on with his solo career by recording with California label Real Music with his release Pure Joy[2] which went on to claim the number one spot on several US radio charts.[3]In 2006 after moving to New Zealand to appear as lead actor in the award winning feature film The Lunatics Ball, Walder launched his own music label, Nomad Soul Records.[1] His first release RISE was launched in March 2007.[1]Russel Walder also released notable side projects and duets, trios and quartets with musicians such as Will Ackerman,[4] Suzanne Ciani. Michael Gettel, Balafon Marimba Ensemble, Andrew White, New Zealand Symphony Orchestra and many others. Russel Walder has also contributed as a composer and performer to many compilations including The Windham Hill Sampler 1986, Comfort Music, Meditation, Windham Hill, The First Ten years, Sanctuary, Dreamscape, Sonia Gaia Collection One, Freedom To Love, and Winters Solstice. His work on Winters Solstice earned him a Grammy Nomination for Best Instrumental Album in 1988 [5]and went on to also earn him 2 gold records and a Platinum sales award.Russel Walder has been touring for more than 20 years and has written over 60 pieces and continues to push limits in both his composition and performance. 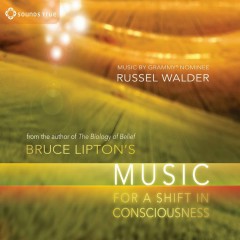 Bruce Lipton's Music For A Shift In Consciousness