The Repo Man Sings For You -

[Del]
It's the Repo Man! Reposession is my occupation
It's not my fault you facin foreclosure, I told ya
I'm just an agent, workin for the man
and his manuscript say you owe him for this land
Don't cry to me, and don't lie to me
Actin like you ain't home, fakin on the phone
You shoulda thought about that when you bought the Benzy
You missed a few increments
now we gotta come and get yo' shit
If you slip on the payments
I get paid to make sure that you pay rent
or get out, throw all your clothes in the streets
Frozen meats, out your refridgerator
then my boys come back and get it later with the forklift
Heh, we don't care how hard you worked, we takin yo' shit
It's too late, your payment's way past your due date
You couldn't hide from me, even with a new face
or plastic surgery, your debt's outstandin
I don't care about your family, don't hand me
no excuses, you know it's useless, no one's stoppin me
Just get off the property before I bring the cops with me
Possibly, this could turn into a criminal act
Gimme your fax machine, PlayStation in the basement
adjacent, to the big screen television
You can't tell the system no, we gotta get the dough
The company want they G's, or the keys
to the convertible, and hey, nothin personal, okay?
I'm just doin my job (you know?)
Collectin on your debts, now you're losin a wad
Bruisin your wallet, whatever in your pocketbook
all get took, to my agency, then they payin me
It ain't phasin me, that's my thing
When I mob off witcha shit, listen to me sing

[Boots]
*thck* One, paycheck from sleepin on the street
*tchka* Two/too, many bills my scrill don't meet
*tchka* Three day notice from the landlord on the seat
Fo-fo', caliber shots ain't discrete
But motherfuckers still jack frequent, no secret
cause they shit be delinquent
And on closer inspection, reposession collection
motivates birth protection in the brokest section
In other words, the ghetto
Repo Man, pullin strings like Giupetto
Squeeze two at him, let go
Cause I just gotta be real
I'm tired of informercials with them five-year payment deals
See I was sleepin on the carpet in my apartment
when I heard my car ignition cause somebody sparked it
So I run all the way down the hallway full throttle
Don't give in is my motto, so I bust him with a bottle
He screamin, "Whatchu gon' pay me with?"
Then he started laughin singin crazy shit

I said, "SHUT THE FUCK UP," and then I banked him in the jaw
But that was no use, even though he skidaddled
bill collectors make my phone rattle, tell my kids don't tattle
When you pick up the receiver, I'm sick with a fever
You don't know where I am either
Even hillbillies at a party linedancin
get they Ford trucks with poor financing
Banks that give the loan figure - damn, in the worst case
we makin money cause we had it in the first place!
And where was it that they got that cash from?
You when you deposit it from bustin yo' ass
Well two weeks after that last altercation
I noticed my front lock had a slight alteration
My TV was gone and out the window from my room
I heard the Repo Man sing his devious tune, it went 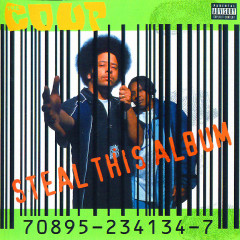