Bring That Beat Back- The Public Enemy Remix Project

Watch the door, Chuck D, Public Enemy
Paris, Guerilla Funk, Rebirth of a Nation 2006
Everybody needs somebody to watch the door as it's goin on
Securin you - who's securin what?!
Watch the door

[Chuck D]
Now I'm down to do your thing if your thing's the right thing
P.E. ain't tryin to hear no fat lady sing (naw)
Don't get it twisted cause we still love the music in the past
Through the years see them use it then abuse it
Some of these cats ain't sat down, washed their hands
and say to the grace to the game, so they're a disgrace to the race
Dig it, P-Dog we be diggin them party joints
Beats for everybody joints
Takin care and persevere I'm makin my point
Message around the world, rap be's for the poor
You on the floor, we at the door
Rob the rich, give to the poor

[Chorus: x2]
Rob the rich, give to the poor
Give back to get back cause we watch the door

[Chuck D]
Cause it's about to go down these cowboys have jumped the corral
Survival yeah we got the nerve to serve
Like a hip-hop bible, don't libel
Guerilla Funk, they got the title
The late great, no need to donate dollars
I don't care if they poppin collars and holla's
Who can't think between drinks, Chuck D I'm the driver
Hard act to follow, I think for tomorrow
Remix of old P.E. hits, I ain't up against it
If it was up to me I'd give it all away (yeah)
Anyway, uploads for my people to download
Shit so hot, iPods explode
One at a time baby, for your mind baby
Uhh, to keep your soul in control baby
Not crazy this party's for everybody
You on the floor, and I be watchin the door

[Chuck D]
Multiply, do not divide
Think globally, act locally
Passport, showin no support
Makin World War III, lookin like a sport
Human race, in the only place
we know as Earth, right in our face
And the firebombs, and the toxic waste
Will leave this world without a trace
And we don't want no other war
Too late the feds done closed the door
And we the peeps get spoken for
The people want peace but the people get a quota
Got the cure, high price for sure
Fix the rich, and damn the poor
Laptops, shoes, off says the law
Make love, fuck the war 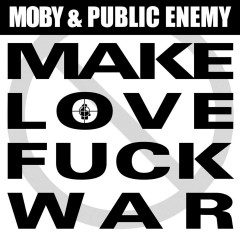 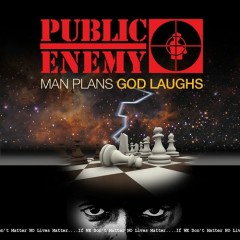 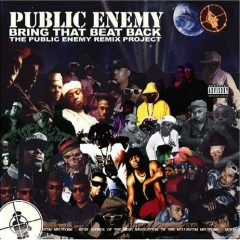 Bring That Beat Back- The Public Enemy Remix Project 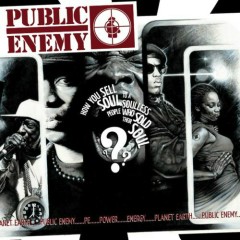